Savage, who retired from the role in 2017, and his wife Susie, also an ’83 Ohio State alum, created the Savage Leadership Endowment to fund a series of talks on vision, inspiration and impact. 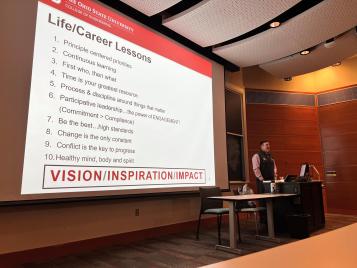 “The goal is to bring in alumni who are leaders in their respective industries,” says ISE Senior Development Director Courtney Ross. “We ask speakers to share life and career lessons.”

Savage, who kicked off the series Oct. 26, says he enjoys the interaction and dialogue with the students. “The caliber of students is better than ever,” he says. “I still think ISE is the best degree you can get to do almost anything.”

He says he wants to advance ISE opportunities even more by ensuring that students develop the kind of “soft skills” that can make an immediate impact on an organization.

“I want to make sure that not only do they have the formal training, but also the leadership training,” he says. “They have to have the ability to not only work on a project, but also to take other people with them. When you graduate, you go from ‘me’ to ‘we.’”

Savage was a General Motors Scholar who held leadership roles with GM and Valeo Engine Cooling before joining Taco Bell in 1993 where he progressed from a market manager to COO by 2002. He led the performance and improvement of more than 6,000 company and franchise Taco Bell restaurants throughout the U.S. In 2014, he was named worldwide COO for Pizza Hut where he oversaw a reorganization establishing a global operating structure and platform across 100 countries. The following year he was named world class operations officer.

“I’ve been blessed to be successful enough that I wanted to pay it forward,” Savage says. “I want to help every graduate. I believe if I had been aware of some of this way of thinking, it would have more readily helped me to make an impact in my career. Companies like to have multi-skilled people in roles.”

Savage was named Distinguished Alumnus by the Ohio State College of Engineering in 2006 in recognition of his achievements and contributions to the profession. He has served on the ISE External Advisory Board and continues in his role as a member of The Ohio State University Foundation Board.

In addition to Savage, alumni Dan and Doris Korda were part of the fall 2022 launch of the series. Dan Korda is president of Lukjan Metal Products and Doris Korda is CEO of Korda Institute for Teaching. Ross says more talks are planned for 2023 in coordination with the student chapter of IISE and Alpha Phi Mu.