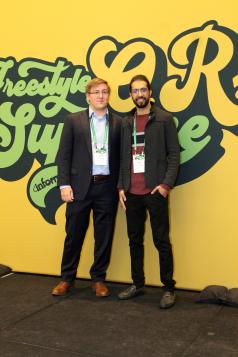 ISE PhD candidate Milad Deghani Filabadi, ’23, teamed up with someone he had never met before to develop a solution for a complicated operations research problem netting the pair third place at the Freestyle O.R. Supreme Expo Competition held during the 2022 INFORMS Annual Meeting in Indianapolis in October.

Since he first registered for the conference, Filabadi says he had been looking forward to the competition, which involved a real-world problem presented by a principal data scientist at SAS Software.

“I was following the news and the invitation emails for the competition several weeks before the competition took place and started more closely focusing on the applications of my research to see what scope of problems fall into my expertise,” he says about his preparation for the game show-style competition now in its fifth year. “But, of course, events like this are not like exams for which there are particular sources to study.

“The competition was formed more around the general knowledge and analytical skills of participants obtained during years of studies. I personally think I prepared for the competition by focusing on challenging problems for years during my master’s degree and my PhD studies.”

Contestants were randomly assigned to teams and presented with a 10-minute case study, “Identifying Promising Compounds,” and given an incomplete biomedical knowledge graph. They were then given 30 minutes to identify a solution. 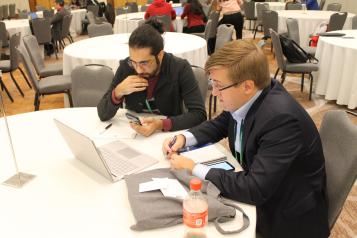 Filabadi was paired with Dylan Ellis of Booz Allen Hamilton, who he met an hour before the competition. Initially, the team was assigned three other members who were unable to make it on the day of the competition. As the only team with two members, Filabadi says it did make it more challenging, but the two “managed to focus on our skillsets and come up with a novel solution.”

“The case was specifically asking for finding similar compounds and diseases based on a knowledge graph highlighting the side effects of compounds, symptoms of diseases, genes, cellular components, molecular functions, etc.,” he says. “This knowledge graph is very complicated and encodes relationships uncovered by millions of studies conducted over the last half-century into a single resource publicly available.

“Our proposed methodology focused on learning approaches such as Hidden Markov Chain, Deep Learning and Applications of Neural Networks. We proposed a simplified graph based on the knowledge graph and modeled an input layer representing compounds, a few hidden layers to model the complicated relationships, and an output layer, representing diseases. Such models enable users to identify the most similar compounds to another compound X that is a known treatment for disease Y, and vice versa, allowing users to identify the compounds that are most effective for treating diseases that are most similar to disease Y. Without such predictive models, the compounds would undergo a clinical trial, which are not cost effective nor practical.”

More than 60 people participated in the competition – both students and early-career professionals – from top universities and companies. The top three teams took home honors based on framing the problem, feasibility of the proposed solution and presentation skills.

Filabadi says he enjoyed the fast-paced environment of the event. “I always look for new challenges and usually competitions are the best ways for me to challenge myself in a learning environment,” he says. “It is very interesting for me how much such competitions can help me grow personally and academically. For instance, in 2019, I participated in the Best Student Paper Competition held by Canadian Operational Research Society and was awarded a prestigious prize as one of the finalists. Also, in my master’s degree at University of Waterloo, I participated in a 3-Minute Thesis (3MT) competition and was among the top three winners. I am excited that I will be competing in the 3MT again in January 2023, but this time at Ohio State.”

Post-graduation, he plans a research-based career in academia or industry, and credits his advisor, Dr. Chen Chen, with encouraging him “to think critically, which I believe is the main component of research,” Filabadi says. “I can see how it is playing a role in succeeding in my career and preparing me for my future career.”