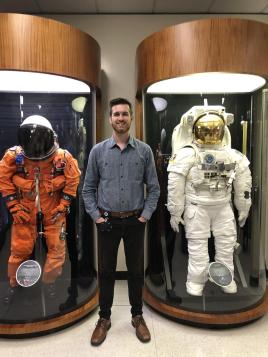 The U.S. space program is returning to the moon and one ISE student has a role in making it happen.

Jacob Keller, ’20, who plans to graduate with his master’s degree in Spring 2023, spent the summer at the NASA Johnson Space Center in Houston, where he was part of an interdisciplinary engineering team assigned to support future manned space exploration missions.

“I really like building the capacity for pushing humanity farther than we’ve gone before,” he says of the experience. “It’s the pinnacle of human technical capabilities.”

Keller served as an exploration engineer intern and worked on decision-support software tools and augmented reality capabilities. “This is something of a new experience to be involved in,” he says, adding, “I’ve always been interested in applying cognitive engineering to manned space exploration.”

His role was to envision and prototype technology for lunar planetary exploration. He says the uncertainty of space operations requires the need to frequently pose the question, “What types of robustness and resilience do we build into these systems?”

Although launches for Artemis I, initially set for late August and early September were scrubbed, Keller’s work is in support of Artemis III, expected to launch in 2025. 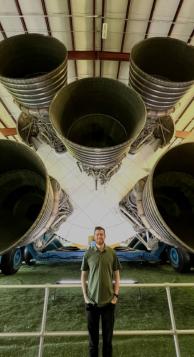 While he is fascinated by the work of the astronauts he is supporting, Keller doesn’t hold notions of attempting to take part in space exploration. “For the most part, I’m pretty cool being on the ground,” he says.

Keller says he landed the assignment by building relationships established through his advisor, ISE Assistant Professor Martijn Ijtsma, and says he is grateful for the experience after a previous internship at NASA was put on hold due to the pandemic.

“I’m a planner,” Keller says, “So, it was a challenge to sit back and let the cards fall the way they wanted to. It definitely made it much sweeter when it came around again.”

Keller holds a research associate position in the ISE Department where he is sharing his NASA experience with other graduate students. “I think my research experience in the Cognitive Systems Engineering Lab is the main thing that allowed me to do this,” he says. “I’m really fortunate because Ohio State is one of the best schools in the country for this type of research.”

While he is back on the Ohio State campus, Keller is still working for NASA part-time as he finishes his degree and is hopeful to continue in a similar capacity following graduation.