Ohio State ISE students participate in a variety of student chapters of professional organizations that add to their education and help prepare them for the workforce. Here’s a roundup of some of the activities sponsored by Alpha Pi Mu (APM), Institute of Industrial and Systems Engineers (IISE), National Society of Black Engineers (NSBE) and Society of Hispanic Engineers (SHPE).

Members of Alpha Pi Mu (APM), the Industrial Engineering Honor Society, took part in a variety of activities over the past year. New member classes were initiated in the fall and spring and included the tradition of holding an initiation dinner at BD’s Mongolian Grill, according to Past President Jonathan Mager. The Senior Banquet, held at the OSU Faculty Club, featured student and faculty speakers, with senior superlatives awarded to the students.

“APM heard from various alumni guest speakers working in different ISE fields,” Mager says. “Socially, we held our semester bowling trips at the end of the fall and spring. We also held many Taco Tuesday events at Cazuela’s on north campus.”

He says the new class of officers have placed an emphasis on wanting to host more events for all ISE students and getting more involved in the Ohio State community.

The three pillars for the Institute of Industrial and Systems Engineers (IISE) are academic, professional and social.

“We try to tie each biweekly, general body meeting back to one of our pillars or goals,” says President Olivia Weatherly. “For example, we have had alumni come for the professional side, we’ve had our academic advisor along with multiple professors come to touch on the academic side, and we play games at our meetings to meet the social pillar.”

Weatherly says students have been pleased to resume meeting in person following virtual meetings following pandemic protocols. For the first time in the organization’s history, IISE hosted a formal and is offering two scholarships to active members.

“We are hosting the Great Lakes IISE Regional Conference in February 2023,” Weatherly says. “We are excited to showcase The Ohio State University and, especially, the ISE Department.”

She says IISE’s consulting team and cohort program continues to grow and now number 30 and 100, respectively. “These are great programs that allow students to get even more involved in the org and meet more students and gain more connections,” Weatherly says. “WE are excited to see where these programs will go in the future.” 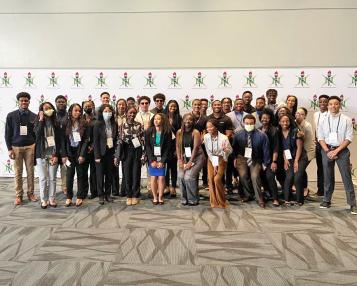 NSBE’s mission is to increase the number of culturally responsible Black engineers who excel academically, succeed professionally and positively impact the community.

Smith says NSBE also hosted a Back-to-School Garden Gala and is working on NSBE’s worldwide Day of Play, along with this year’s Diversity Company Social.

Highlights of the past year for The Society of Hispanic Engineers (SHPE) were being able to attend national and regional conferences and conventions in person. Members of the organization were present at the SHPE National Convention in Orlando where 16 students attended, 11 students were interviewed and six were offered jobs with companies in attendance. At the convention, the Ohio State chapter received the Spring 2021 Blue Chip Award and Regional Chapter Award.

President Alfonso Tinoco Lopez says the chapter also was recognized with the Fall 2021 Blue Chip Award at the Regional Leadership Development Conference in Indianapolis this spring.