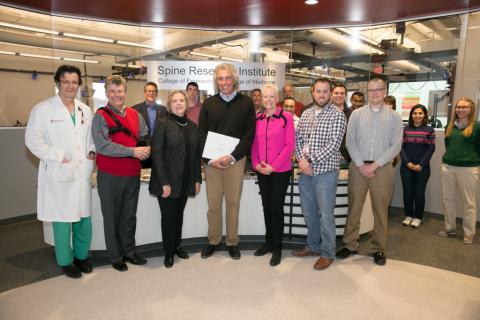 It’s not surprising that when the recent list of Distinguished Scholar Award winners at The Ohio State University was announced, Williams Marras’ name was on the list.

Marras, who holds the Honda Chair in the Department of Integrated Systems Engineering at Ohio State and serves as the Director of the Spine Research Institute as well as Executive Director for the Institute for Ergonomics, has a list of accomplishments longer than most people’s, well … spine.

Marras said he was surprised when College of Engineering Dean David Williams, Ohio State Vice President for Research Caroline Whitacre and Marras’ colleagues came by to share the news in late February. He was even more taken aback when Dr. Whitacre cited some of his accomplishments, including the $31 million his research has generated in grants and contracts to further the study and improve the well-being of people with back pain. Marras had never tallied it up before. “I thought, ‘Wow! That’s pretty impressive,’” he said.

But Marras is quick to share the credit. In fact, he says, “It’s all about the team,” when asked which of his many achievements makes him the proudest.

“I have a great staff and a great bunch of students,” he says. “I take pride in seeing them evolve and what they are able to do in the lab to break new frontiers of knowledge. That’s what gets me excited.”

Marras, who has been a professor at Ohio State for 35 years, and his team continue to break new ground in spine disorders. “One of our proudest accomplishments is building personalized models of a patient,” he says. By utilizing a patient’s diagnostics, such as MRIs and CT scans, the Spine Research Institute can build a dynamic model of an individual to determine the best approach for treatment.

He points out that the College of Engineering and the University are the reasons that these types of breakthroughs can happen. “The environment here at Ohio State has been tremendous,” Marras says. “Dean Williams has opened up doors and opportunities for us to be successful and thrive.”

He acknowledges his team – Greg Knapik, Jon Dufour, Alex Aurand, Prasath Mageswaran, Sue Ferguson and Gary Allread – as being the “core of helping this come together.”

In their letter to Marras announcing his award, Ohio State President Michael Drake and Dr. Whitacre noted that Marras joins “an elite group of faculty at Ohio State … recognized for their accomplishments in all areas of research and creative endeavor.”

According to Janet Weisenberger, Senior Associate Vice President in the Office of Research, “very few scientists have such a broad and translational impact” as Marras has had. “Dr. Marras’ work is particularly impressive because he has made extraordinary contributions to both the basic science and the applications of biomechanics and spinal injury,” says Weisenberger, who oversees the Distinguished Scholar Award program and serves as chair of the selection committee. “Thus, his work not only gives us a better understanding of basic biomechanics theory and modeling, but also has helped in a practical way to reduce the incidence and severity of workplace injuries.”

Marras was elected a Fellow of the American Association for the Advancement of Science in 2013 based on evaluations by peer scientists, and is a fellow of six other national and international distinguished organizations.

In addition to numerous papers he has written, committees he has served and awards he has won, Marras holds three patents on apparatuses for monitoring the motion components of the spine. He is a much sought-after consultant for corporations such as Ford Motor Company, RCA, Ross Laboratories, Steelcase, Honda of America, The Limited, Target, Sears, Safeway and Costco.

Marras has presented to NATO and the National Academy of Sciences, as well as regional, national and international organizations. His work has appeared in hundreds of publications and he has authored or co-authored eight books on ergonomics and contributed to dozens of others.

He is a member of nearly every professional society in his field, including the International Ergonomics Association, the International Society for the Study of the Lumbar Spine, the New York Academy of Sciences and the National Academy of Engineering, and served as the past president of the Human Factors and Ergonomics Society – the world’s largest organization in this space. Throughout his career, Marras has mentored and advised countless numbers of students and colleagues.

Marras and other Distinguished Scholars will be recognized at a May 2 reception at the Wexner Center for the Arts and during a football game in Ohio Stadium this fall.